Boris Janjic (partner to our editor Di Morrissey) is a member of a very exclusive club – he climbed down Ayers Rock (Uluru) but never up the majestic sacred site.

‘Actually I was half carried down in a daze,’ he says remembering March 5, 1968 when the helicopter he was in filming a scene for a TV commercial, crashed into the top of the rock, just missing the talent and the producer.

Both the producer Bob Hall and the talent, well known model Beverely Weynton, flung themselves to one side as they saw the helicopter spiral down towards them. 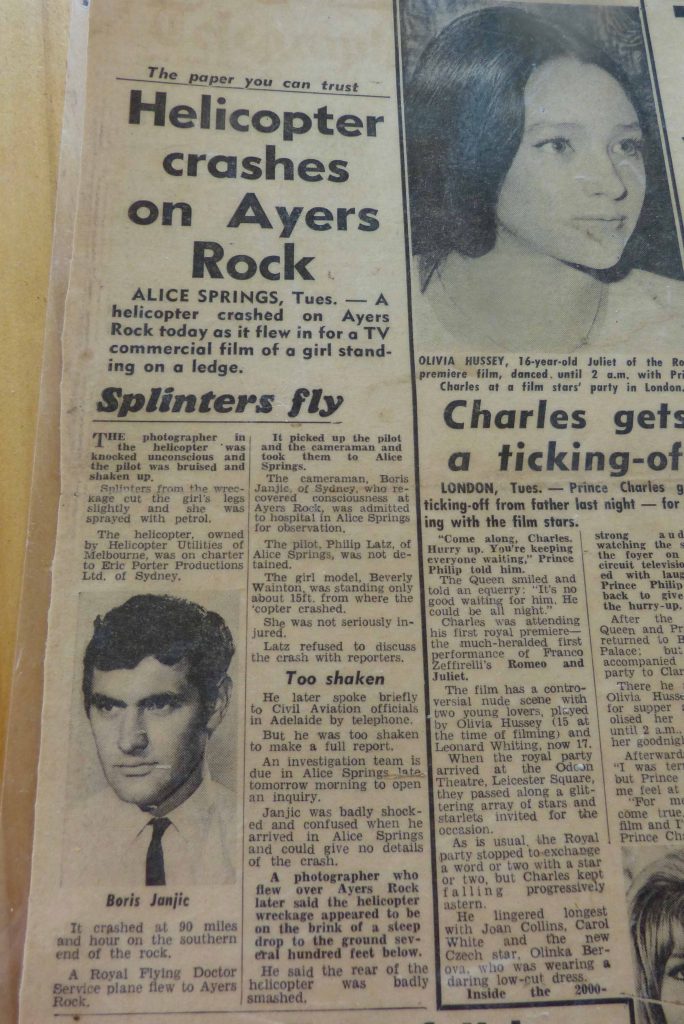 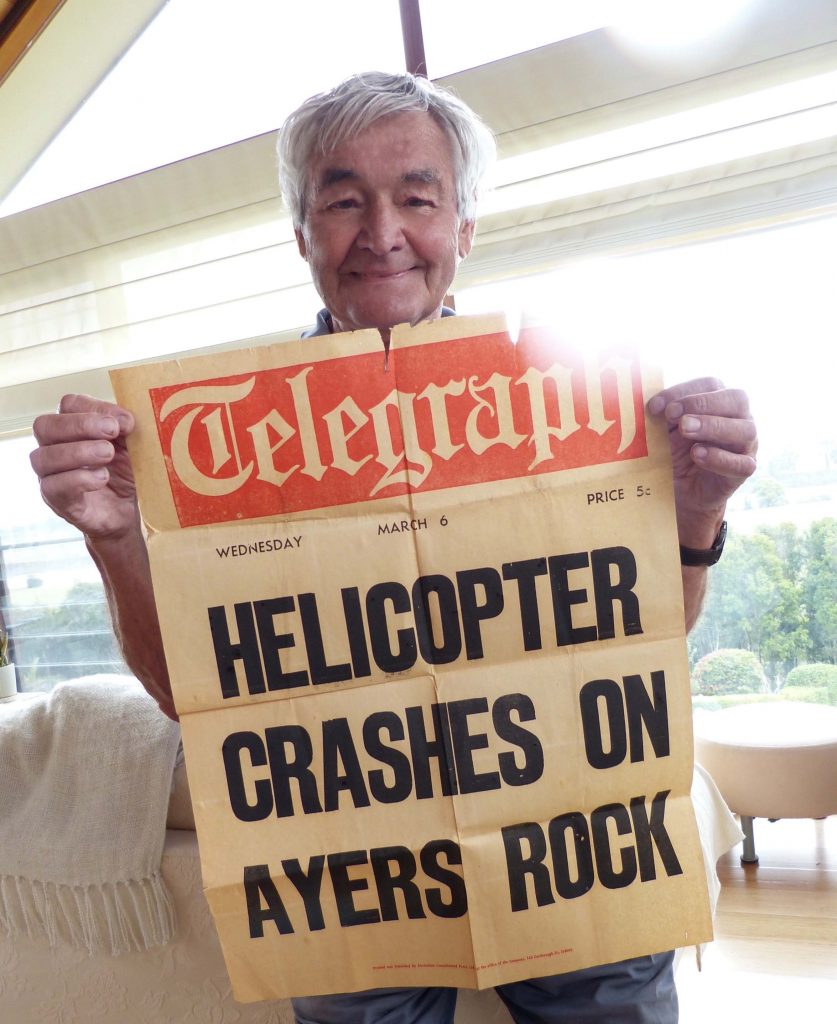 ‘It wouldn’t be allowed today,’ grinned Boris. ‘But ad agencies in those days were always coming up with crazy ideas.

As a well known and respected cinematographer Boris has filmed in helicopters in all manner of locations, belted in, hanging his legs out the cockpit door to get the best angle, be it zooming after the Malborough Man on horseback in a forest, over the jagged remote Australian coastline, for  Bob Raymond’s “Pelican’s Progress”  documentary series, or chasing racing cars and stage coaches for movies. He always put his hand up first if it involved a helicopter.

‘This commercial was for Phillips Worldwide new transistor radio that was the size of a large packet of cigarettes. They wanted to show for its size it could receive clearly anywhere in the world. So what better place to prove the point than the top of Ayers Rock, as it was known back then, before Uluru.’

And by the standards of the sixties, the “talent” was a glam model in a bikini. Of course.

‘We stayed in the racketty motel at the base of the rock back then, and because I prefer morning light and before the wind got up, we headed out after breakfast. Phil Latz, the pilot from Darwin, flew everyone one by one up to the landing spot he’d picked out on one of the top ridges of the rock gouged out by the prevailing winds.’

They’d worked out the sequence. Bob hid behind a boulder while Beverley posed, holding her tranny to her ear, in her bikini, atop the rock. As you do.

So the actual star of the commercial is this small plastic box she’s holding, so Boris wanted a good close up, but without the juddering from the rotors.

Phil decided to go up to 8 thousand feet and then turning off the rotors, and with just the engine fly down while Boris was filming.

‘By now it was after 9am and there was a tailwind and the turbulence over the face of the rock created a down draft. Later Phil reckoned the engine didn’t perform as well as it might have. I was looking through the eyepiece at Beverley and saw the ridge coming up at us pretty fast and as Phil turned the chopper away from Beverley and the ridge, I hunched over protecting my precious camera which was a big 35mm Arriflex.’

The helicopter crumpled into the ridge at the edge of a long drop, the wooden, rubber coated rotor blades smashing and spinning across the rock. Beverly had flung herself to one side but a chunk embedded itself in her heel.

Phil managed to disentangle himself from the disintegrated chopper fearing a fire as he could smell fuel dropping onto the hot exhaust.

Boris was unconscious, still cradling the camera. Phil undid Boris’s safety harness and pulled him away from the crash as Bob, the producer, scrambled down towards them.

Boris had a severe gash in his leg which was bleeding profusely, but he regained consciousness as they dragged themselves away from the crash site. Beverley snapped a couple of photos.

‘I felt dazed, and saw some puddles and wanted to drink the water as the shock had given me a huge thirst,’ said Boris. ‘Phil told me not to drink that water. So we decided to move as far as we could from the chopper in case it did go up. The chopper’s radio was smashed to smithereens as was the walkie talkie we had to communicate with the motel.’

But as the heat rose they decided to try and climb down  the steep jagged rock face to where they could see the distant chain half way up the rock face for climbers.

‘Beverley only had a light shirt on over her bikini and was getting badly burned as were her feet as her rubber sandals disintegrated. I could hardly walk so was leaning on Phil.  By luck the film editor, Paul Bushby, had come along to Ayers Rock for the ride as we were all flown up from Sydney to Alice Springs on an executive jet. He was at the motel and wondered why he hadn’t heard from us, nor did they hear the helicopter anymore. So he raised the alarm.

‘When we heard the Flying Doctor’s chopper, Bob had me lie down, spread-eagled, the sign of distress, which they interpreted as one dead. Before we were even off the rock Sydney radio and the newspapers were  broadcasting a chopper had crashed on the rock with one dead.’

‘When we got to the bottom, Paul was there have driven over from the motel, and had grabbed a bottle of cognac. He must have seen one too many St Bernard rescues in movies I guess,’ laughs Boris. ‘I was parched, the shock made me dry and thirsty so I gulped down several large swigs.  When the Flying Doctor got to me, he started screaming, “Who gave this man alcohol” so he couldn’t administer any medication or pain killers!

Boris spent four days in Alice Springs hospital while his leg healed. It wasn’t till decades later he discovered he had injured his spine.

‘Needless to say, the commercial never got made. My camera survived intact, though I often wonder what happened to the footage as the camera was rolling the whole way down!  The final insult was National Parks charged us with disturbing the peace, damaging a National Park site, and littering!’

The wreckage of the helicopter was dragged off  by another chopper and dumped at the old motel. ‘They salvaged part of the  tail and made it into a bar stool with my name on it and a sign . . .  ‘If Boris walks in vacate his stool!’

To this day, Boris remains a devoted helicopter fan. ‘I always feel safe flying in them,’ he says. ‘It couldn’t happen twice.’