It appears that students, teachers at the Wingham Brush School, the people at the Post Office, passers-by, let alone the council workers at the Wingham Library, had no idea that the merry scraping, water pressure removal of layers of old paint, scattering dust and scales of paint residue hither, thither and yon, was spreading dangerous and potentially deadly lead poisoned paint.

Someone must have finally figured it out as the old building was suddenly shrouded, planked up and patched in silver bandaids to stop flakes of possibly lead paint becoming airborne.

However there was no urgent message to the community, teachers, students and parents that children, as well as adults in the vicinity, could have been exposed to a highly deadly substance.

Eventually someone must have informed Council of this major public health hazard. However, true to form, it seems they hunkered down in denial over yet another monstrous and dangerous stuff-up.

Visitors to the Post Office and walking past might have twigged something was afoot at the appearance of barricades and bulging multi-wrapped bags labelled, ‘Toxic, Poison, Dangerous, Can cause cancer, do not puncture” left standing around. (Possible temptation for curious, malevolent or dishonest youth to carry away and toss in someone’s front yard!)

Said school Principal Kylie Seaman, ‘We didn’t even know the cleaning of the Library was going to be done. We’ve known all the way along about the extension at the back but this whole thing was a surprise. I’m working with council’s project manager and he lets me know where they’re up to, but the cleaning just started and we weren’t informed,’ said Mrs Seaman sounding very cross, adding, ‘When we saw what was happening and a member of the community pointed it out to us that it could be a problem, I straight away called in our Department of Education team to clean up and take samples to test. A specialist came from Newcastle and they swabbed everything down and cleaned and so we sent a message home to the parents that DOE were cleaning and that it is safe for the kids to go back into those rooms. I closed the canteen and a classroom as I didn’t want students walking around to as the fences were down.’

Council kept silent and failed to immediately issue a public statement regarding the incident. Under the law they are required to inform various agencies including WorkSafe NSW, the Environmental Protection Agency, the NSW Health Department, and the NSW Department of Education. 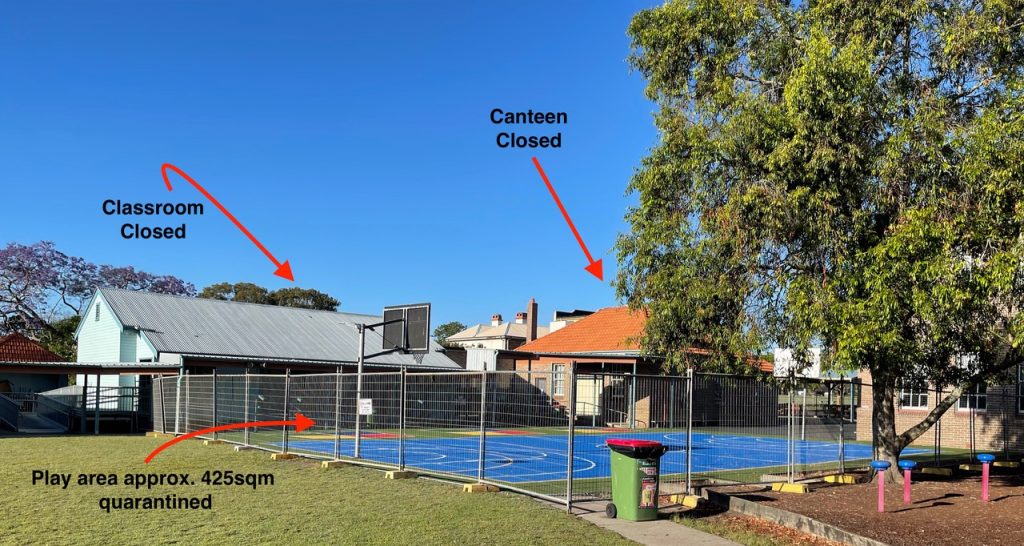 Lead paint contamination, especially for young children is as serious, if not more so, than asbestos inhalation. Some council workmen were seen shirtless and without the specific apparatus and PPE gear.

Council’s failure to issue a public statement regarding the incident is a dreadful indictment of rushing to cover asses before warning the public. (Think Bight Cemetery fiasco. Years later still unfixed and no-one held accountable. One has a horrible feeling – could the same bloke be responsible? Who tells the workmen what to do? With whom does the buck stop?)

“I am stunned that the Wingham community was not advised of this incident. I am seeking urgent information from the General Manager. My principal concern at this time is for the workers who were directed to undertake the high-pressure cleaning and I hope that they were all wearing the appropriate PPE gear; and that the appropriate testing of the lead levels in their blood has now been undertaken, and I am also particularly concerned for the children at Wingham Brush School who may have either been directly or indirectly affected.

Questions of responsibility; what all this will now cost Council, and further delays to the library project will be addressed at the appropriate time.”

The renovation and the expansion of the Wingham Library was undertaken by Council’s ‘Open Spaces’ section which is under the ‘Liveable Communities Division.’ This is the same division responsible for the debacle at the Bight Cemetery (which is still unresolved after 3 years) along with the Taree Hockey fields where Council had to stump up approximately over $400,000 to pay for ‘unanticipated’ earthworks, which some informed sources attribute to poor project planning and scoping and the Hockey Association ended up paying some of that extra cost.

Unbeknownst to the public the troubled Wingham Library project has been plagued with delays, including significant cost blow outs since it was first announced in June 2020. The project was initiated because of a government grant of $500,000 which was to be matched with $400,000 from Council’s Section 94 Contributions.

In early 2021, Council announced that it was working through a tender process for the library project and that the successful builder would start in early March (2021) with the expectation that the library would be closed for 3 months whilst the work was being completed.

A successful tenderer was appointed yet no work was carried out as it was discovered the council designs did not meet current building codes. Then some nine months later, around November 2021, Council re-tendered the entire project.

In 2022, no work was carried out until an announcement was made that the Wingham Library would be closing on 24 June for a period of 4 months in order to complete the works and the budget for the project was now to be $1,000,000. (Some estimate that figure could now double.)

It’s unlikely that the library will re-open this year.

At the Council Meeting of 7 November, a further $104,000 was approved for the Wingham Library Project but no reference to, nor was there a report pertaining to, the lead paint contamination which occurred at the end of October.

How Could this happen?

The protocols around working heritage and historic buildings are not only well known, but are very clearly documented though a myriad of legislation and publications and clearly defined protocols.

Council employs Asset Managers who are responsible for the maintenance of ‘our’ assets and the preservation of an Asset Register. That Register should clearly identify the issues and risks associated with all Council properties.

When any work is to be undertaken on any Council Asset, an Asset Manager should brief the Project Manager on the status of the asset and any potential risks.

In this instance any competent Project Manager should also understand that the heritage Wingham School of Arts Building, housing the library, was built in 1907, so inevitably there was always going to be a high concentration and some exposure to lead based paint used prior to 1970 where the lead concentration could have been up to 50%.

WorkSafe NSW is very clear through published material and the NSW Work Health and Safety Regulation 2017 regarding working safely with lead-based paints:

“A lead process carried out at a workplace is constituted by “using a power tool, including abrasive blasting and high pressure water jets, to remove a surface coated with paint containing more than 1% by dry weight of lead and handling waste containing lead resulting from the removal”.

The “requisite practice” means that before any such work is to be carried out, a site -specific “Safe Work Method Statement” needs to be developed, after which all workers on that task are to be briefed on the work and then be required to sign the ‘Statement’ confirming their understanding before the work is commenced. Did this happen?

Anyone traversing the Martin Bridge in Taree over the past two years would have seem the white cocoons and ventilation system that were progressively placed around sections of the bridge to quarantine the possibility of any lead paint dust escaping. Could there have been any clearer warning sign or notice to people working in the building game to be aware of lead paint and other toxic pollutants.

The Wingham Public Library is a lovely gracious building one of many in the town which sadly have been pulled down. And replaced with what? No doubt knowing the previous loss of heritage buildings, the community was thrilled to see the Library get a make-over – even if it was going to cost a bundle. Some did wonder why rooms upstairs in the library are being done up when they are not open to the public and rarely used. Unfathomingly the stairs to this underutilised private space are being replaced with a lift.

What’s the “makeover” of the Wingham Library going to cost now!

But the major issue. . . apart from the horror of anyone being diagnosed with lead poisoning, is how the whole matter has been handled by council. Yet again.

Said Kylie Seaman, ‘When we were told by our DOE people that the school was clear and the soil tests were ok we sent a second message home to the parents that DOE said that it is safe for the kids to go back into those rooms. However they are ripping up the basketball court as a precaution.’

And was there any lead contamination?

‘We have gone by what the DOE have told us, that we’re clear. If Council find anything in their tests then it’s up to them to disclose it,’ said Mrs Seaman tartly.

Good on Mrs Seaman for being proactive! (She doesn’t seem to want to have much truck with Council by the sound of it!)

How gullible does Council think we are? And as we’ve all learned, it all comes out in the end no matter how hard the council tries to keep a lid on things.

Wouldn’t it be better if Council was upfront and honest and go to the community and say, – “look, we stuffed up here, this is what happened and why, and so this is what we’re doing about it – like holding the person/people responsible to account – and we’re really sorry and will make sure it never happens again.”

People in positions of authority who don’t do their job properly should be moved on, retrained, apologise and amends made quickly, swiftly and openly.

Dream on, I hear you say.