Country people weep at the destruction of not just farmland, but rural landscapes that heal souls and please the eye under the rushed sprawl of unimaginative, housing estates.

Midcoast Council area is blessed by what has always been a “clean green natural” environment with family farms, rural industries, a gentle pace of life along our beaches, rivers, hills and forests. Towns evolved to suit and meet our needs, and if visitors stumbled upon us, well good on them, we’re happy to share what we have and how we live here.

But it seems now, that our area is being created, changed and developed for an influx of newcomers, retirees, visitors and tourists. Yet rental or purchased housing for families, workers, medical or industrial staff, you name it, is in short supply or too expensive. And let’s not look down the future road of fleeing climate refugees.

The fact remains that in the mix of a growing population the most important factor is – space, to grow food from cattle to microgreens. We can’t grow everything hydroponically and our most basic need is water… which is a whole other scary story!

“Jobs and growth” is only part of a very large mix. Innovation, industry and mum and pop enterprises are part of the fabric of our community as much as experimental, innovative technology and new ways of creating and surviving in all fields of enterprise. But these must go hand in hand with the social, local, and caring for our communities. Development in all fields should complement not obliterate what we love about the place we call home.

Newcomers choose to settle here to be part of who we are and what we have. Newcomers can, and do contribute to, and enhance our community. But we all lament losing our landscape, wildlife and lifestyle.

The responsibility to nurture, protect and support the local community is surely, partly a role of the council.

Businesses that benefit from people shopping, buying and building, may not agree. But it is all in how matters are managed. Visitors are attracted here or move here for the historic, countrified, clean and green natural beauty, the lifestyle, and the pace of life.

And so given the developments small and large mushrooming everywhere, those in the pipeline and ones still on the drawing board, perhaps it’s time Council et al took a breath and looked at what we have here… and how we can do it better and more sympathetically and sensitively to protect the local environment.

Surely the number of homes cheek by jowl can be balanced by less houses and more space to add desirable aesthetics as well as privacy and attractiveness with trees and gardens. Why must developers clear a site to dirt before building when with some planning and building around established greenery makes the project more desirable.

Developers may not agree… but at the end of the day when we’re hemmed in by crammed houses, traffic and no land, (look at Sydney!)  the foresight will have been more valuable… monetarily as well as environmentally.

Just A Few Coming Our Way 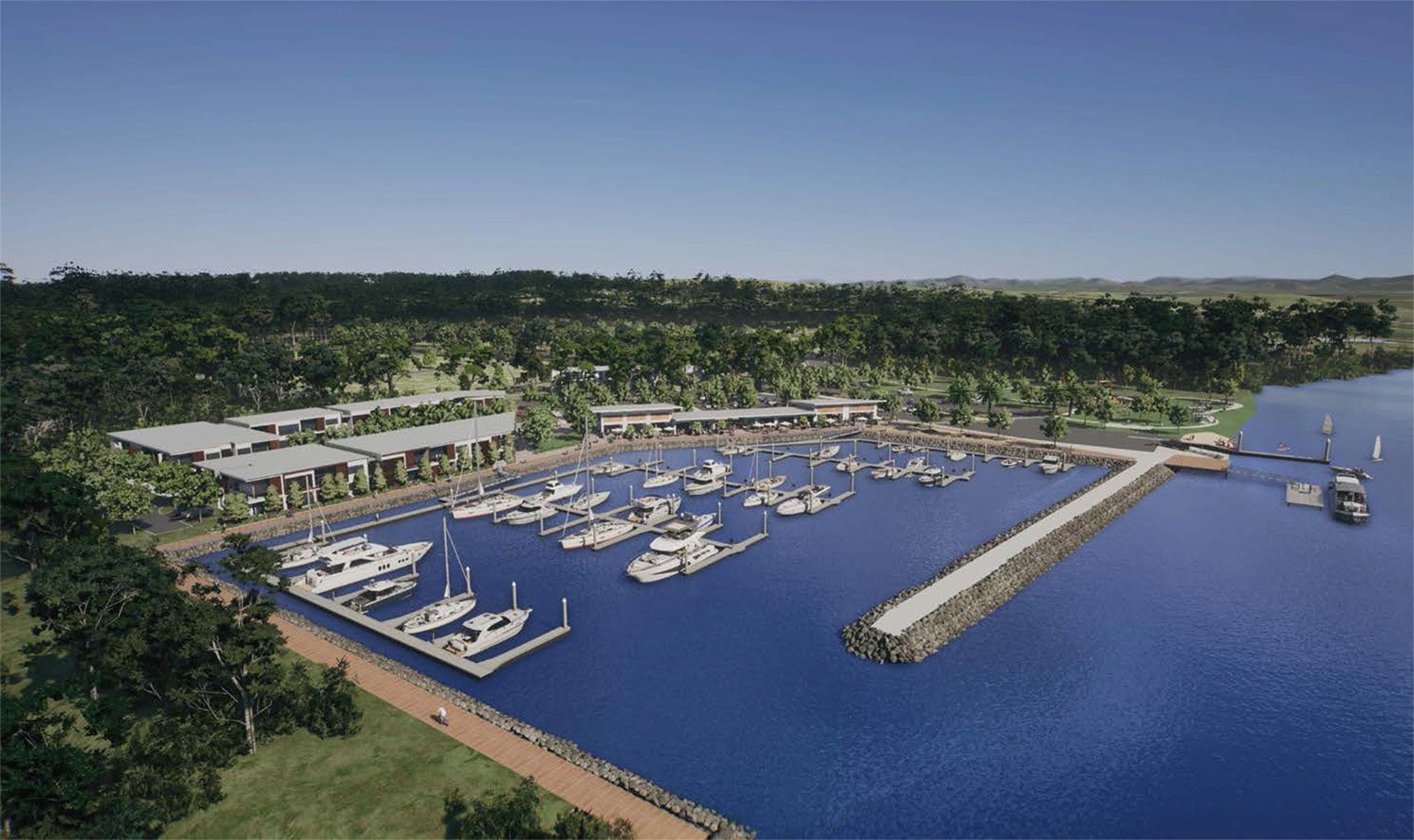 Since our article last month on the proposed housing development at Parry’s Cove, Tea Gardens, where there was no mention of any marina, it seems there has been a rethink by the developers, Sheargolds.

As we suggested, calling the development a “cove” might indicate that a marina could eventuate.

On 4 April, 2022 the Hunter Regional Planning Panel approved a considerable portion of this development but excluded the proposed housing area in what is technically known as Lot 10 DP 270100 within the Parry’s Cove site. Included in the proposal were 114 hectares to be set aside as conservation offset land. This is a gesture by the developer to keep a chunk of land intact for biodiversity, local flora and fauna, to replace what will be wiped out in the housing development.

The Parry’s Cove proposed stages 15 and 16 (132 house sites) were struck out (or “saved” as one councillor put it) by the Hunter Regional Planning Panel on 4 April 2022.

On 23 February 2020, MidCoast Greens Councillor, Dheera Smith congratulated the council for approving to retain this land as a “Franklin Dam” moment. However,  the Council was quick to point out that it should be noted the development application for Parry’s Cove is being assessed by the Hunter Central Coast Regional Planning Panel – not MidCoast Council.

This voluntary planning agreement is currently with Sheargolds’ lawyers to report back to Council in August 2022.

In Sheargold’s original launch to the community it proposed that features of the application include –“multi-million-dollar residential facilities…The Residents Hub- a central community meeting space including…expansive decks and covered lookouts over the central lake…In addition to the resident’s facilities, multiple parks and laneways will create a connected and walkable streetscape to encourage residents and the broader community alike to retreat and enjoy the beautiful natural setting with approximately 100 ha of bushland set aside and protected into perpetuity to conserve local biodiversity. The landscape masterplan has a goal of producing a sensitive design that provides an abundance of habitat for the array of local fauna.”

However, it was pointed out at a Regional Planning Panel zoom meeting (16 March, 2022) by an objector that the offset area contains considerable marine swamplands and is unsuitable for fauna such as koalas and there is no significant flora or Wallum frogs.

On 16 June 2022 – the Sheargold Group announced that initial consultation with the public on their ‘Marina Proposal’ (the company’s description) had now commenced. Sheargolds’ senior representatives sought a preliminary meeting with Ms Shai Richardson, the CEO of the Karuah Local Aboriginal Land Council, attended by other KLALC representatives, including Mr. Travis Cobb and other invited persons.

And whaddya know… Sheargolds announced they are currently in the process of preparing a planning proposal for a marina that would sit adjacent to the Parry’s Cove project.

The proposal for the Parry’s Cove Marina is on the internet with lovely photos of large boats moored in pristine water next to the Marina Village. A video includes areas 15 and 16 –the housing lots that were just excluded by the Regional Planning Panel. The whole area is described as providing: “an accessible and versatile place for the Tea Gardens community to enjoy the Myall River Waterfront. At the Marina Village you will be able to enjoy everything from a day of relaxation – picking up a coffee, window shopping and enjoying the beautiful waterfront view – to a day filled with activities – launching your kayak or SUP from the waterfront park and fishing from the pier – to a new waterfront dining experience in the evening.”

In May this year Council announced a proposal from Landcom to change land zoning rules to allow around 2,100 homes, a town centre and open space at North Tuncurry as exhibited by the NSW Department of Planning (which is the NSW Government’s land and property development organisation).

“This is a significant proposal that, if approved, would see 615 hectares of Crown Land rezoned and able to be developed,” MidCoast Council’s Director of Liveable Communities, Paul De Szell, explained, and that the planning proposal is being assessed by the State Government, and not MidCoast Council, Mr De Szell reinforced.

However, if the proposal is successful and the zone changes to allow for the development, MidCoast Council will be responsible for assessing development applications for construction on the site.

Landcom’s vision is to deliver new homes, jobs, services, conservation land, and open space close to the growing Tuncurry-Forster urban area. The North Tuncurry Urban Release Area is located on the eastern side of The Lakes Way, directly to the north of, and adjoining the Tuncurry town centre. It includes: More than 2,100 dwellings to accommodate up to 4,500 residents in a mix of low-rise homes centred around a new local centre, golf course and open space.

Approximately 13 hectares of employment land for industrial and business development to generate 126 full-time jobs on the site and more than 2,100 on-site jobs during construction.

Details on the proposal can be found on the Department of Planning and Environment website.

So what has happened to this land since it was knocked back years ago as it was considered swamp and had a protected orchid species on it?

Seems to me we must be alert and alarmed! 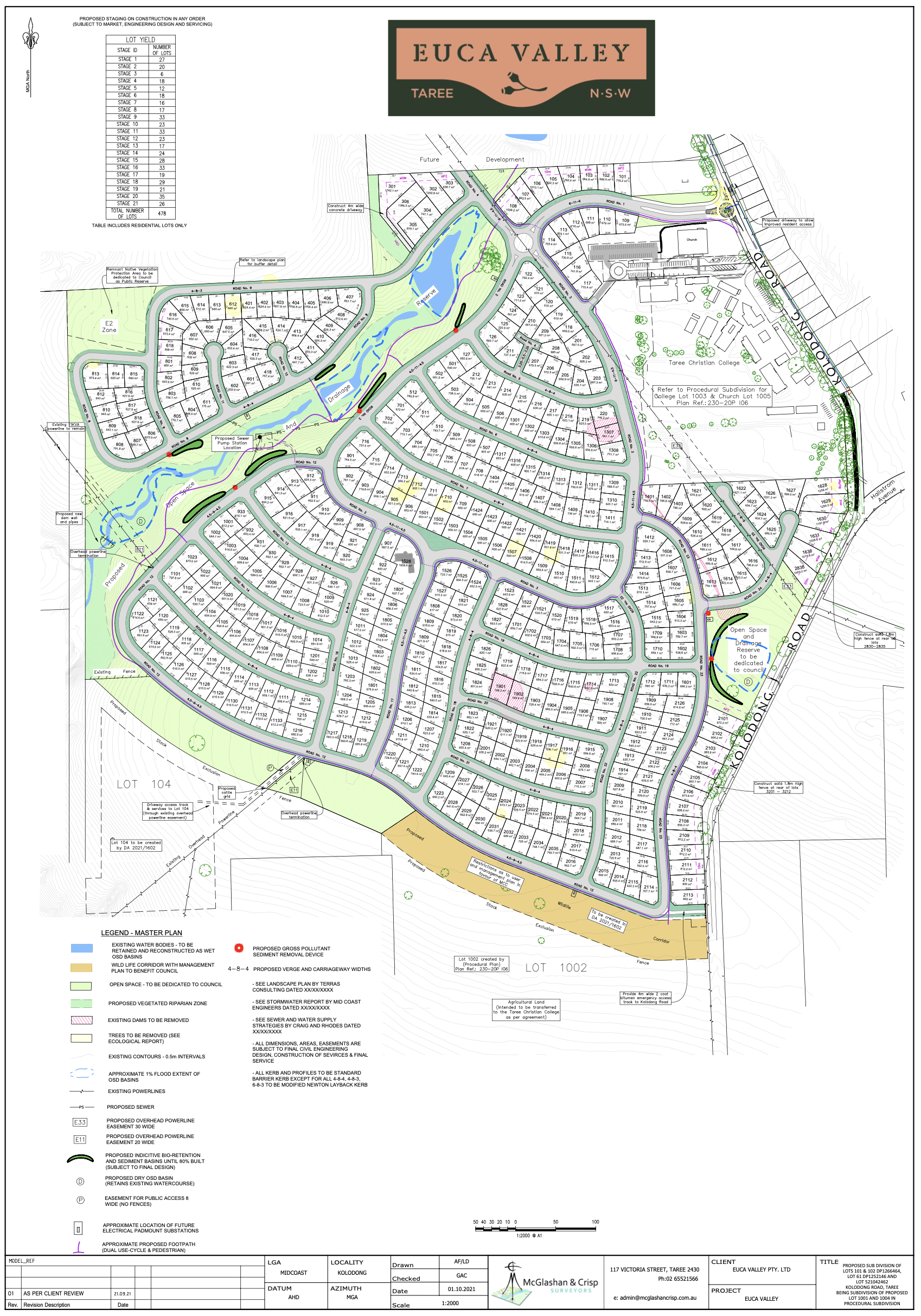 The announcement that a 78 hectare property at Kolodong (between Wingham and Taree) had been sold to Cameron Brae property development was made in October 2020.

Locals who were unaware of such plans were somewhat stunned to learn of the plan for turning the rural land into:

By “viewing platforms” some locals wondered if these might be for viewing the potential sea of housing roofs replacing the neighbouring paddocks. A 50 metre buffer zone was included in the plans between the development and surrounding rural land.

A lot of locals were unaware the area was rezoned to residential by MidCoast Council late in 2019.

However, at the first announcement of the project local protest groups vociferously pointed out the potential chaos of traffic madness and congestion which is proving correct as construction began.  And now the removal of 69 fully grown eucalyptus trees along one side of Wingham Road has further outraged the community. The trees’ destruction also caused distress and anger from locals as it was believed the road could have been widened on the other side where there weren’t trees, even if it cost more.

“To improve large sections of the roadworks in that area changes are necessary.  It will cost $20 million.    There is a need to widen the road and align roadworks to create one intersection that can handle traffic into the future.

The north side has considerable infrastructure such as kerb and guttering  and overhead powerlines, and underground there are sewerage pipes  and telecommunications infrastructure. Widening this side would push the road closer to the property boundaries.  Therefore council has decided to widen the road on the south side.

It is true there are trees we planted here years ago, but at the time there was no planning for widening the road.”

Apparently we can look forward to a display village at the entry of the renamed “Eucha Valley” estate.

Housing lots range from 400-600 metre square. Had they been 1.5 acre blocks the design might have been more sensitive and rural looking.

The developers will not construct the homes but offer them to builders.

While the developer’s representative did visit and schmooze with some concerned Kolodong locals over the past year or so, appeasing some and not others, the issue remains of concern over the escalating development in the electorate.

The Future of Housing

Housing, especially affordable housing, is critical in our area. The homeless, the flood and fire affected, chronically ill and disabled are a huge group of affected people which includes women and children, victims of domestic violence.

The economy, the lack of staff and funds are all given as reasons for the situation. But the perception the “rich are getting richer” and with no long-term future proofing or thoughtful or creative planning for our area, let alone dealing with climate change, could see us soon reaching a point where it’s all too late.