Michael Katakis
(Michael is an American writer, photographer, Fellow of the Royal Geographical Society and manager of Ernest Hemingway’s literary estate. His latest book is “A Thousand Shards of Glass.”)

People and nations are propelled and held back by their myths. Myth is repeated over time, generation after generation, until it evolves into a narrative that promotes a constructed good while deleting a nation’s darker truths.

Myth is a long-term advertising campaign that sells a fiction that when successfully absorbed ‘is’ true. And yet, the shadows of what has been, nag at the national conscience like an unwelcomed stranger at our collective doors. The history of real intentions and deeds are not so easily erased.

A belief in such myths is a kind of sleepwalking that does not require thought. In fact, myth is preferable for anyone who does not wish to think at all. One need only parrot the tired slogans of, “ Make America Great Again” or “America is the greatest nation on earth” or,  “…all men are created equal.” Repeating them, succeeds in drowning out, for a time, a more complete history allowing perpetrators, and the ignorant, an escape hatch from the truth, but, just like the Wizard of Oz, the illusion only works if you don’t look behind the curtain.

The United States, has been drowning in myth for a long time.  We have myths about our courage and equality and how God is on our side. There is the myth about our kindness, generosity and inclusiveness and how much we care about children and each other. There are myths about our sense of justice and how we want to make the world safe for Democracy and how our capitalistic system is the greatest engine for creating prosperity. In short, we Americans have an overinflated myth about our goodness. However, one need only peek behind the curtain to see what is really going on, and what is going on is very troubling indeed, because the lies we tell ourselves have a very high cost. It is a cost that is bankrupting our humanity, dismantling ideas and institutions that we had once hoped would speak to more than ledgers recording profit and loss.

Millions of Americans have become a small people who are afraid of their own shadows. They have sacrificed truth and reason for carnival barkers offering empty and ugly promises.  In such a society it is nearly impossible to entertain, let alone inculcate, morality and ethics into daily lives and actions.  We have been here before but most Americans don’t know that because, as Gore Vidal wrote, “Americans know nothing because they remember nothing.”

One of America’s claims to goodness is that we love our children. Notice I say ‘our’ children because, at the time of this writing President Donald Trump and his minions are separating children from their parents. The majority of those people have crossed the American border illegally hoping to find some relief from the terrible violence they are running from. To those in power it doesn’t matter if the people are seeking asylum from gangs, failed countries or domestic and societal abuse. Thousands of children who are already traumatised by war and violence come to what they hope will be a safe haven where they might find a moment’s peace, only to be traumatised further when they are separated from their parents by American officials.

People should not come into a country illegally however, we must never  become monsters when carrying out the law.

In America we feel that by saying how much we care, we have done something virtuous, not unlike the confessional where one is forgiven their trespasses with a few Hail Mary’s. Once absolved, the admitted sinner is free to go on their merry way and do it again. It’s a great racket but one with a high, hidden cost.

In America, our claims that we care about ‘our’ children, let alone other people’s children, is put into question based upon, not alternative truths, but facts.

In the 2014 National Vital Statistics Report, it shows that in 2010 the US ranked 26thamong 29 OECD countries with regard to infant death. When compared to all wealthy industrialised nations, the United States ranks last or nearly last year after year. Those ‘facts’ would suggest the myth of how much we love our own children is questionable at best, and further questions, why, in supposedly the greatest and richest nation on earth, does the U.S. stay at the bottom of lists regarding infant mortality when compared to every other Western industrialied nation? A nation’s myth of goodness is a powerful tool that assists people in turning away from the realities that surround them, at least for a time.

During the lead up to the invasion of Iraq, lapel pin patriots, in the George W. Bush administration put out many untruths and did so under the guise of objectivity and love of country. Planning to go to war for their own interests and agendas, the Bush administration used any information, no matter how questionable, to make a case for the invasion they were already determined to execute no matter any evidence to the contrary.

Now, many years later, those actions that did not entertain doubt, continue to exact a cost in lives and treasure with no end in sight

What is striking is how ignorant millions of Americans are about their own country’s history and what we have been doing for a long time. Prior to the invasion of Iraq, many people, mostly liberals, were appalled at the thought we might invade a country pre-emptively. They behaved as if the United States had not done such things before and claimed such actions did not reflect ‘True’ American values or who we really were.

The conduct of a majority of Americans, including liberals, during the lead up to the invasion of Iraq was that of blind patriotism and fear. But in the end, as Voltaire wrote, “anyone who can make you believe in absurdities can make you commit atrocities.”

Americans, shocked by the attacks of September 11 chose to not look behind the curtain. If they had, they would have seen the scoundrels who were selling a war based upon America’s myth of goodness with fear and lies thrown in for good measure. They are people George Orwell would have recognised, people like Former draft dodger, Dick Cheney, John Bolton, Henry Kissinger or Donald Trump. The kind of people who promote, then profit from war in varied ways, “the kind of person who is far away when the trigger is pulled.”

Americans of many stripes turned away when they knew “enhanced interrogation” meant torture, choosing instead to look away and then rationalise actions that were in violation of international law.

Not surprising then that to this day the United States is not a signatory to the International Criminal Court.

So much for our myth about the rule of law.

When the country desperately needed Americans to stand and say no to the criminality being done in their name, millions remained seated.  Some liberal politicians argued that the nation that was invading Iraq was not the ‘real’ America that they knew to be just and good.

The idea that the invasion of Iraq was something new for America was laughable to those who knew anything about the history of the United States.  Some people suggested that the invasion of Iraq was about freeing the Iraqi people from a terrible dictator who the United States once supported. Many administration officials came forward, as did others in the media, to say that it was about humanitarian and security reasons and others, because the threat from ‘weapons of mass destruction’ compelled us to act quickly and decisively. Those were lies but many people, against their own instincts chose to believe such twaddle, including some intelligent ones like Christopher Hitchens but, anyone who knew America’s “black heart’ understood that “humanitarian reasons” or “freeing” the Iraqi people was the last thing on America’s mind.

There was a white Southern congressman who yelled “You lie” during the president’s State of the Union speech and claims that the president was not a real American because he had not been born in the United States. Even when it was shown beyond any doubt, that President Obama was a citizen of the United States, Donald Trump, continued to sow doubt by injecting racism and hatred in the body politic and millions of Americans lapped up the gruel Trump fed them. Simply because they wanted it to be true, was enough for them to believe it ‘was’ true.

Many Republican leaders and their followers went along with the lies because it served their purposes, at least for a time. Elected Republicans declared that it was their mission to make sure the new president failed.

For a long time Democrats talked down to people and then morphed into something arrogant and silly. What the party had become under Clinton, bore no resemblance to the Democrats I remember as a kid in Chicago who represented factory workers and plumbers and all the folks who didn’t play golf on the weekends or sip chardonnay.

The Democrats abandoned who they were and what they stood for and forgot there was a difference between making money and earning it. They gave corporations more power over people’s lives with policies that helped disenfranchise workers and ship jobs overseas where corporations could exploit people who had no redress. Nothing is as profitable and desirable for corporations than a work force that can’t object.

Americans themselves have sold out their neighbors and communities by abandoning their main streets, choosing to shop at the Walmarts and Targets filled with cheap Chinese products. Those choices have had devastating outcomes. It was not just government and corporations that reduced the country to a nickel and dime store.  Many people had a hand in selling out their neighbors and country for a perceived bargain. So much for “we are all in this together.’

American’s actions and votes have, in part, brought us to where we are today. It is the result of short-term thinking or no thinking at all. In these United States of Salesmen we have shown each other, and the world, time and again who so many of us are. It seems understandable then, that millions of us would vote for a con artist and grifter selling snake oil, to be President of the United States. He’s just like us. He is millions of ‘us.’

As a boy, I was told that I would be judged by the company I kept. I have chosen not to stand with millions of Americans who now stand with President Trump, and by proxy the Klu Klux Klan, the American Nazi party and other abhorrent groups and individuals who have endorsed and approve of this president’s words and conduct.

At the time of this writing many Americans rationalise the cruel and illegal acts that are being perpetrated in their, and all American’s names. Perhaps one day they will come to regret, that when the times called for courage and decency, they were silent, and by their silence became collaborators in making the world darker.

This is an edited Introduction to the New American Edition of “A Thousand Shards of Glass” Published by Simon and Schuster. Reprinted by kind permission from Michael Katakis. 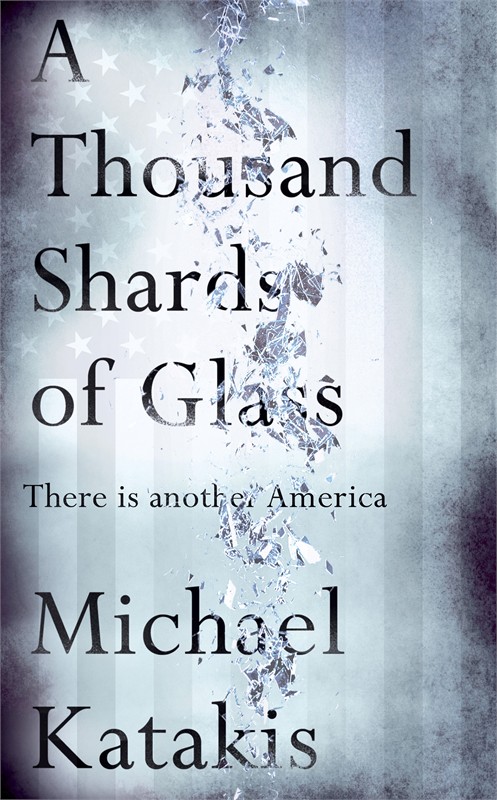