Great aunts, actually. Since Poppy arrived last June, we’ve inched a generation along the family tree. It’s yet to be decided whether we’ll earn our new moniker. 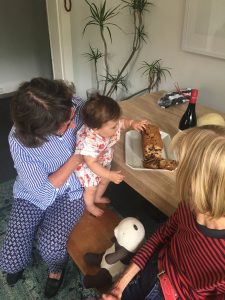 The call to arms came over a text: “Hello, Aunties, is anyone free to babysit Poppy on Saturday night? We won’t be late.” It was a scramble to get in first. “I’m free, anyone want to join me?” That was a genuine offer of delight with a side-text of, “I’m a little nervous; it’s been a while.” Twenty-five years to be precise. Those babies were my own, so I had free rein to mess up.

The text merry-go-round started to spin and an hour later we had two takers and a disappointed decliner who already had plans of a romantic nature.

Communications continued with the most important considerations swiftly negotiated. “I’ll bring ratatouille and polenta.” An offer of salad came from Great Aunt No.2 and then, what we’d all been hoping for, “OK, I’ll bring a cake.” Bingo! A lesson for Baby Poppy as she grows older: Never offer to cook a cake if Great Aunt No.1 is in town. Her cakes are known far and wide.

We arrived within minutes of each other to find a contented Poppy having just woken from a long snooze. Her parents, instantly transformed into party clobber, ran through the important bits: Poppy has a slight cold and can take 5 mls of infant paracetamol, and there’s plenty of Mama’s milk in the freezer. Easy. A doddle. So we thought.

After half an hour of showing off her new skills of sitting and crawling, earning for herself pantomime-like coos of amazement, she needed a nappy change. Creaking our way up off the floor on dodgy knees and stiff hips, we headed for the nursery. Dress-up time for Poppy! Squeals of delight over her wardrobe of frills had us putting her nappy on back-to-front. No matter.

To our disappointment she quickly tired of this game and to our horror, STARTED TO CRY. The scene changed rapidly. “Try her over your shoulder.” “Her daddy holds her like this.” “No, keep her upright.”  “No, cradle her down.”

The crying intensified which wasn’t right because our niece, Poppy’s mother, told us she’s the happiest baby in the world. “Give her some water.” “No, warm up the milk. IT’S FROZEN!” “She’s burning up – let’s take her outside.” “She’ll catch a chill; let’s take her inside.” “She’s STILL crying. I hope the neighbours don’t dob us in tomorrow.”

Someone remembered the paracetamol. It took three of us to work out how to draw up five millilitres into a baby syringe. We shot it into her rosebud mouth; most of it stayed there.

The tears kept springing from her deep blue eyes. Someone remembered the age-old baby soother (her dummy had been well-and-truly spat by this stage). Pram to the rescue! Now, if we could just unfold it. Ten minutes later we took Poppy on a walk. Not IN the pram; that just came along with us, empty.

Back in the nursery she was handed around like a hot potato, each of us trying a different lullaby and rocking motion. Eventually, our own mother called on the hotline from Heaven. “Hold her close, tight and upright. Sing your own fractured version of Brahms Lullaby in a deep, soothing note – all the better if it’s off-key. Let her feel the vibration of your calm voice, her head again your chest.”

Years ago, a friend and I had a sandwich shop in Darlinghurst called Get Fat, and this cake was often served there. I don’t remember where the recipe came from originally, and it has been adapted over time to suit ovens in different houses and personal preferences. I also used to make this cake for our dear old dad. He would slice it very thinly to accompany a cuppa, often, and kid himself he wasn’t overdoing it with the sweet stuff. It is nutritious enough with the nuts and fruit anyway.

This cake keeps for a few days if well wrapped up; the chocolate solidifies as it cools and makes for a pleasant surprise.

Loaf tin lined with paper/ or coated with butter and flour

Beat the eggs and sugar together until pale.
Sift the flour and baking powder together.
Add flour mixture to eggs and stir well to combine.
Add fruits, nuts and chocolate.
Stir until combined and fill loaf tin, smoothing the top. Bang the tin on the counter to remove any air bubbles.
Cook in preheated oven for about 50 minutes or until a skewer inserted into the cake is dry.
Cool before removing from the tin. 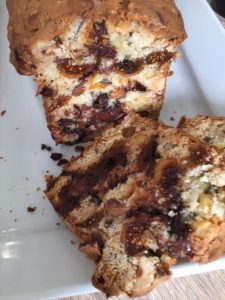