If ever there was an indication of the dire straits we are in as a result of drought caused by Climate Change, it’s right here.

The Wingham Brush, drawcard to the Manning Valley, is critically drought-stressed from the worst drought so far recorded.  362.2 mm to date for this year – way, way worse than 1994’s 508 mm recorded since records began in 1888! 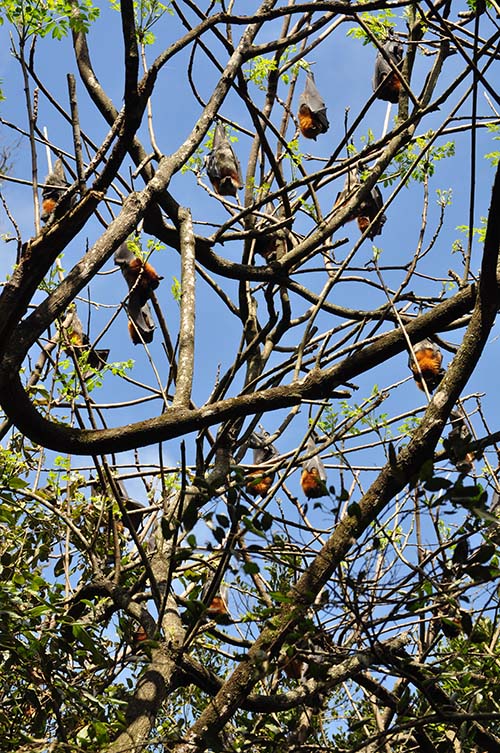 Droughts are nothing new here and many of the 70 species of trees are drought-deciduous, in other words they drop their leaves and become dormant, in a manner similar to trees in the northern hemisphere during winter.  It is unknown how long our trees can persist in this dormancy before dying.   As substantial rains are not forecast before February, we could witness the loss of a large percentage of trees in the Brush and this loss of rainforest trees is likely to be widespread in our catchment.

Once rainforests dry to this degree they are particularly vulnerable to fire which is fatal.  The Brush is eerily quiet now as only a handful of flying-foxes remain in one corner.  There is no evidence of any breeding pairs this year, with this generation’s offspring having been aborted or abandoned by their starving mothers.  This is the first time anyone can remember flying-foxes abandoning the Brush, which is one of their major permanent breeding sites across their distribution, in mid-season.

Not only could we lose our iconic Brush, but Grey-headed Flying-foxes, our major tourist drawcard and already listed as vulnerable, appear to be rapidly slipping down the road towards extinction.

The drought, along with associated disastrous fires, only 25 years ago were considered a 1:100 year event.   Australia’s climate is marked by extremes which are its natural feature, an increase in frequency and severity of both droughts and floods are predicted with Climate Change, alongside a general average global warming and rise in sea levels.

Some will remark they have seen plenty of droughts before, but the rainfall records prove these latest droughts are far worse and, should another dry period of similar severity occur within the next 25 years, there will very likely be a major shift in our region’s vegetation.  The Manning River has now stopped flowing, severely impacting the aquatic environment, including species like bass and our very own Manning River Helmeted Turtle.  Salinity levels in our upper estuary are now proving toxic to the Ironwood trees (Waterhousea floribunda) lining our river, some of which are centuries old.  We may well run out of water too.

It is time for a major rethink about a population plan for the world’s driest inhabited continent, including one for our own catchment.  We also need to establish where it is safe to live and get a handle on illegal dwellings.  Re-development and refurbishing our existing safe urban areas will need to replace the current suburban and hobby farm sprawl.  These changes will present many political difficulties from vested interests, greatly challenging our democratic system.

As Australians, we need to finally own up to these very real limitations, as well as facing up to the scientific evidence for man-made global Climate Change, a change greatly magnifying those limitations.