Tough Is Not Enough seemed an apt title. When I was very young, playing cricket with a tennis ball seemed more sensible to me than the hard one that hurt. But something happened when I started playing rugby league at school: something deep inside me rebelled at any weakness in my character. That was the start of wanting to prove to myself that I was tough, but nothing was ever good enough until I was 54 years old. 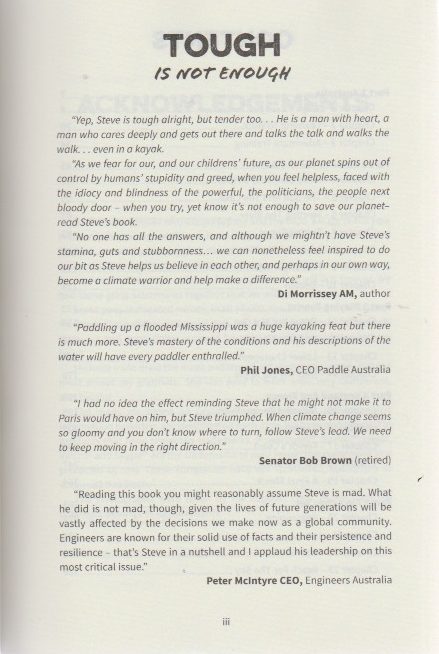 It was 2007. I sold our manufacturing business and set off on a kayaking trip from Brisbane to Adelaide through the Murray Darling basin. There is a mountain range to cross on the way but the kayak had wheels and a pulling harness. As an engineer I was confident in the design, but concerned whether it was possible to drag 70kg up the mountain. An added problem was that 10 months before setting out I had shattered the ribs and clavicle on the right side of my chest. My scapula was displaced through the glenoid, making my shoulder dislocated by more than a centimetre.

I needn’t have worried. The big hill was difficult but possible. My shoulder got better, and after two months on the journey I could wash my left armpit with my right hand. The trip wasn’t easy because the country was in drought and I ended up dragging the kayak for 1,080km out of 3,050km. I have since met a fellow Australian who has paddled the Mississippi, Amazon, and Volga Rivers who said that the Darling was by far the hardest. Talking with him was when I started to feel like I might be a real adventurer.

My passion has always been water, but it had to come second to the threat of the climate emergency. Nothing else matters if we can’t get that right. I had intended to paddle North America from north to south, but discussing this with a friend, it quickly became south to north extending to Paris for COP21, the 2015 climate summit. Eventually the trip became Canberra to Paris and then back to Canberra. There was no question in my mind that it would happen, that I was tough enough to complete it one way or another. Well on the wrong side of 60 I also knew that I needed to seize the opportunity and not put it off.

Paddling up the Mississippi was the hardest physical thing I have ever done. It was during a flood. You paddle in treetops with land at the levees behind the trees, meaning there is nowhere to stop for hours at a time. Barges line the shore for the first 800km necessitating long hard slogs out in the current. Log jams at bends coincide with underwater walls causing whirlpools and strong currents that are almost impossible to paddle through. Many times per day you risk your life in very difficult circumstances. And you are on your own – supporters are not on your journey. They have their own lives to lead. This feeling of abandonment can attack your core, a rot eating at your heart. On my first trip I managed to overcome such demons and on the river my thoughts stayed positive.

Eventually the great river beat me and I resorted to buying a cheap bicycle from Walmart, riding 1,400km from Memphis to Greenville and then paddling up to New York. Paddling into New York was huge. I was so proud, almost overwhelmed. Then I paddled across England, through London, across the channel and up the Seine to Paris. 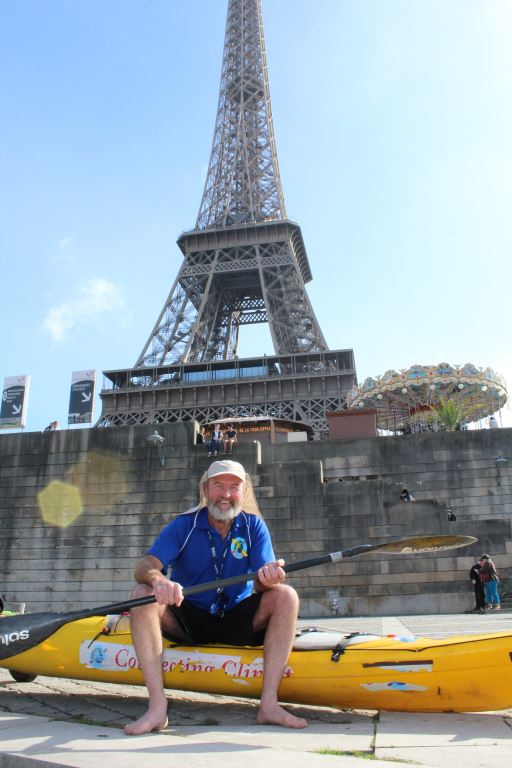 As I sat under the Eiffel Tower I tried to make sense of the world. I wrote:

“The trip is now very clear to me. It is the same as the fight for climate change resolution, a tough hard slog with huge mental challenges. It will be won not by celebrities, and not by the rich and famous. There will be no accolades for the warriors. It will be won by ordinary people determined that the future of the human race is paramount, who will do whatever they can in their power to bring about the changes in our society that must come if we are to survive.”

I had made it. Although I hadn’t realised it at the time, I had cheated death, taxed my body to the limit, and tortured my mind, but I had made it. It was nearly time to drag my kayak from the Eiffel Tower to COP21. Then the terrorists attacked. It shocked Paris, it shocked the world and it meant that my kayak would not be allowed on the streets. I was exhausted, numb and ready to just go home.

It took two years to get my mind back together and complete the circle back to Canberra. This was different. It was uplifting. Even dragging Old Yella, the new name for my kayak, over a mountain range was fun. In the end, with the support of many dedicated people, we made a difference.

I’m still a climate warrior but Old Yella has retired. I paddle for fun now and fight for the future through speaking engagements, my professional work as an engineer and through writing. I am finally content. 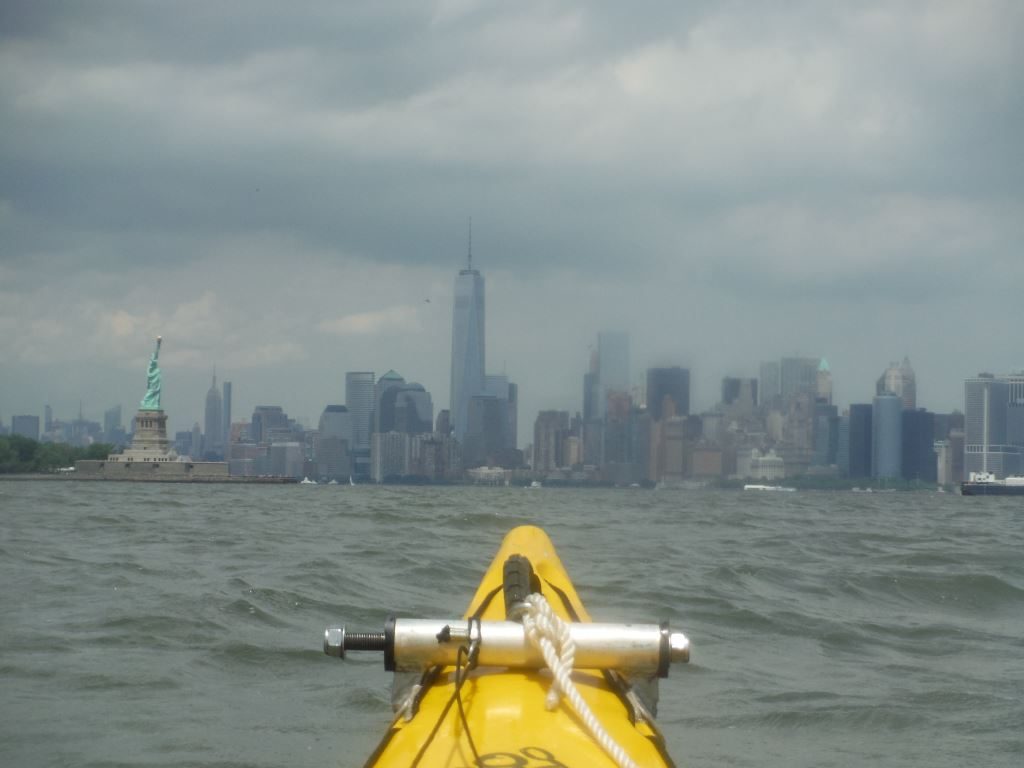 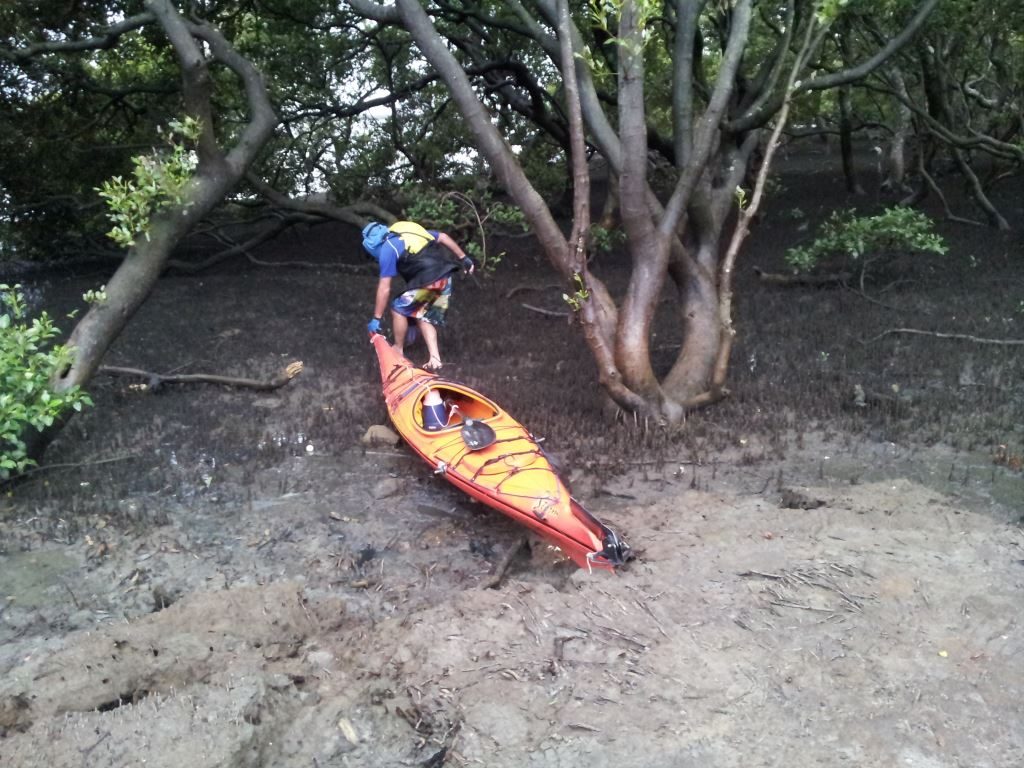 Steve Posselt is a civil and water engineer. He set off from Canberra to drag and paddle his kayak through three continents and attended the Paris climate conference COP21. Tough is Not Enough (Ebono) is his second book.

First published in The Guardia Australia.

Steve is an old mate from the Northern Rivers.His brother Ron, was GM at  Greater Taree City Council. His book, “Tough is Not Enough” available at all good bookstores, online Booktopia and Amazon.