The Masters Petition containing over 11,000 signatures opposing the proposed centralisation of MidCoast Council’s operations to the Masters warehouse in Taree costing over $47 Million was discussed in the NSW Legislative Assembly on 8th August.

Sponsored by the No MidCoast Council Move to Masters Group, signatures were collected primarily from two locations by a handful of dedicated residents led by Katrina Stanfield, over a 21 days during the period of the Federal Election Campaign. 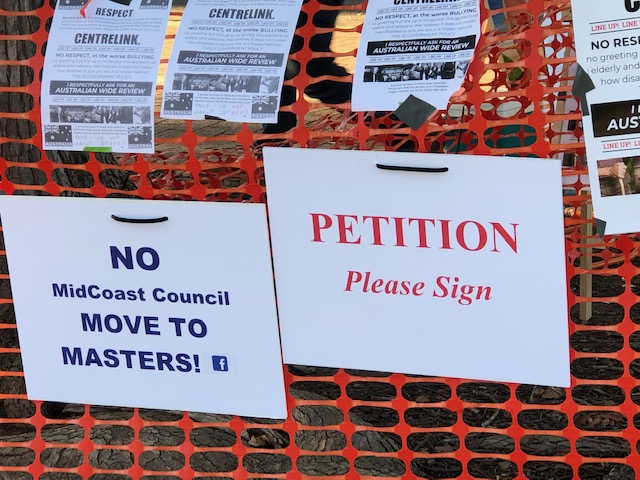 What was very clear was that only one of the speakers Jamie Parker, appeared to be over all the issues and understood the depth and intensity of community outrage at this flawed proposal. 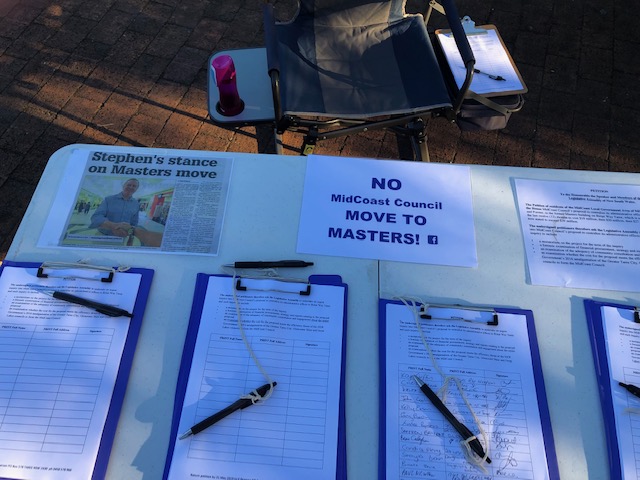 His suggestion that an Upper House Inquiry be established has both merit and is a sensible proposition. The Government does not have the numbers in the Upper House and as such this would be a good opportunity for the Greens, the Independents and Labor to demonstrate to our community and indeed regional and rural communities throughout the State that they are interested and are truly representing the concerns and issues of people, and bring about an Inquiry.

The key point that appeared to be missed by a number of speakers  (particularly on the Government side) about this Petition was that the 11,000 signatures were collected in only 21 days, and although a significant achievement in its own right, this is just a microcosm of the public outrage over this proposal; had the petition been run over 3 months and signatures collected across the entire LGA, the number of signatories would have been in the tens of thousands.

In this case we understand that there was a time imperative and the collection of signatures was cut short due to a need to get the matter into the NSW Parliament as quickly as possible to highlight the issue before too much money had been wasted by MCC on the proposal. The minimum number to trigger a debate and highlight the issue was 10,000 signatures.

Councillor Peter Epov has some experience with petitions, having organised a petition campaigning for Better Roads and Bridges in 2014 which was submitted into Federal Parliament with over 21,000 signatures, also collected in 21 days, Epov says:

“I think that the Masters Petition is a significant achievement and a very clear indication of overwhelming public opinion. Collected in a very short span of time,  essentially from two locations and with only a very limited number of volunteers. For our Petition, we had many many more volunteers and over 100 collection points. So I believe in these circumstances these 11,000 signatures clearly represent overwhelming public opposition to the project, and a very strong statement which should not be trivialised nor discounted.”

Stephen Bromhead’s position both during the debate in Parliament and in recent weeks on this issue was been both confusing, inconsistent and somewhat staggering at times, culminating in him making the admission; that as our local member neither he nor the Government have any influence over Council.

Mr Bromhead is on the record as saying:

“ I spoke to the General Manager and expressed my opinion not to buy the Masters store and not to move there.”

Previously he opposed the destination name Barrington Coast including running several community consultations and a poll on his Facebook site which attracted over 5000 votes.

He arranged and attended a meeting between the Minister for Local Government, Shelley Hancock, Katrina Stanfield and Cr Jan McWilliams, but according to Facebook posts he refused to participate in a photograph with them during their visit to Parliament House, and now the latest twist is a photograph posted by Mr Bromhead on his Facebook page featuring himself, the Minister for Local Government, Mayor David West, Deputy Mayor Katheryn Smith and GM Adrian Panuccio, with the caption where Mr Bromhead says:

“MCC are doing a fantastic job for our community and receiving accolades from Ministers.”

The obvious question to Mr Bromhead is: For doing what?

And by what measure are they doing a ‘fantastic job’? Certainly not in the eyes of this community!

Mr Bromhead’s statement has also come on the back of the prior statement by the Minister for Local Government in  Parliament during the Petition discussion where she said:

“ I have asked that the Office of Local Government closely monitor MidCoast Council in light of the concerns expressed by the community.”

One now also has to wonder how genuine those comments were and whether the OLG has actually been monitoring MidCoast Council “closely” or has it just been the case of the old public service wink, wink, nod, nod?

At the end of the day the truth will eventually come out as it always does, and as the project starts to crumble or the budget blows out the community will be vindicated.

We understand a dossier has also been handed to the Minister with a series of claims, time will tell whether these will be followed up or the dossier will be just handed on to the MCC General Manager.

Mr Bromhead has also effectively suggested that the fight is now over on Masters and that Council should move.

Regrettably this is not a matter of conjecture nor opinion of whether we like strawberry or chocolate milkshakes, this is an issue of a $47 Million expenditure of our ratepayers money, it is a situation of right versus wrong, facts over fiction, and this Masters debacle will end up being like the proverbial albatross that will hang around and fester around the necks of the General Manager and the Councillors. (And if you recall it was all instigated in secret by the dearly departed former GM Handford, without Councillors consultation.)

Given the public outrage as it stands right now, at the Council Election next September there will be a wipe out and Mr Bromhead is likely to see a whole new set of Councillors elected, many of whom will be very hostile to him and the Government. Not to mention the community.

And let’s not forget that the Minister for Local Government, Shelley Hancock, stated in Parliament:

“This is a large expenditure commitment from the council and it is important that the local community is able to have their say on the way their rates are spent.”

Well Mrs Hancock, we didn’t get to have our say on how our rates are being spent! Nor were we consulted on all the possible applications for the Masters warehouse after it was bought, as was originally promised.

And only a few of us did get to have a say through the dodgy consultation on the dubious Financing Strategy, where Council sent out a junk mail notifications to residents, many of which either didn’t arrive or showed up after the consultation was over.  Oh, and lets not forget the one sided survey questions. Where was the OLG back then?

The Financing Strategy still hasn’t been settled with claims of a big black hole of around $5 Million. Council staff were told during most of those consultations last year, that the projected revenue from both the disposal and lease of assets was unrealistic, and of course this has now been proven to be the case. This despite Mayor West pontificating on radio that Masters will be a $55 million asset leaving lots of money to spend on roads etc.  Crunch the numbers again –  the interest on $20 million over the next twenty years for a start, let alone potential blow out of costs on the fit out and the sheer impracticality of locating staff etc in Taree.

“I am advised that the project is being considered by council using a staged gateway decision process whereby council is reviewing the merit of proceeding with the project at different points.”

And: “I would urge the council to ensure it is consulting with its residents at every stage of this project to ensure that the residents who elect councillors are being heard and the best outcome for the region is found by working together as a council and a community.”

The fight is not over, Mr Bromhead and Mr Panuccio!

Council has also failed to inform us as to when the project will actually start and finish, nor have we even seen any design or drawings.

The Minister also said:“Ultimately the community will hold their elected representatives to account for the decisions that have been made.”

This may be well and good and the voters will clearly express their views in September next year, but malfeasance and waste of precious and limited funds in a low socio-economic area, with high unemployment, struggling with significant issues and challenges, is not acceptable by any measure! Why did the NSW Government step into the Port Macquarie Glass House issue and eventually sack the Council?

Given changes in technology and management practices, which perhaps our inexperienced General Manager is not familiar with, this is a building which be obsolete within 8 to 10 years, but the rate payers will be paying for it the next 20.

Consider what could that $47 Million be spent on? A shelter for homeless people for starters?

Bring on the Upper House Inquiry!